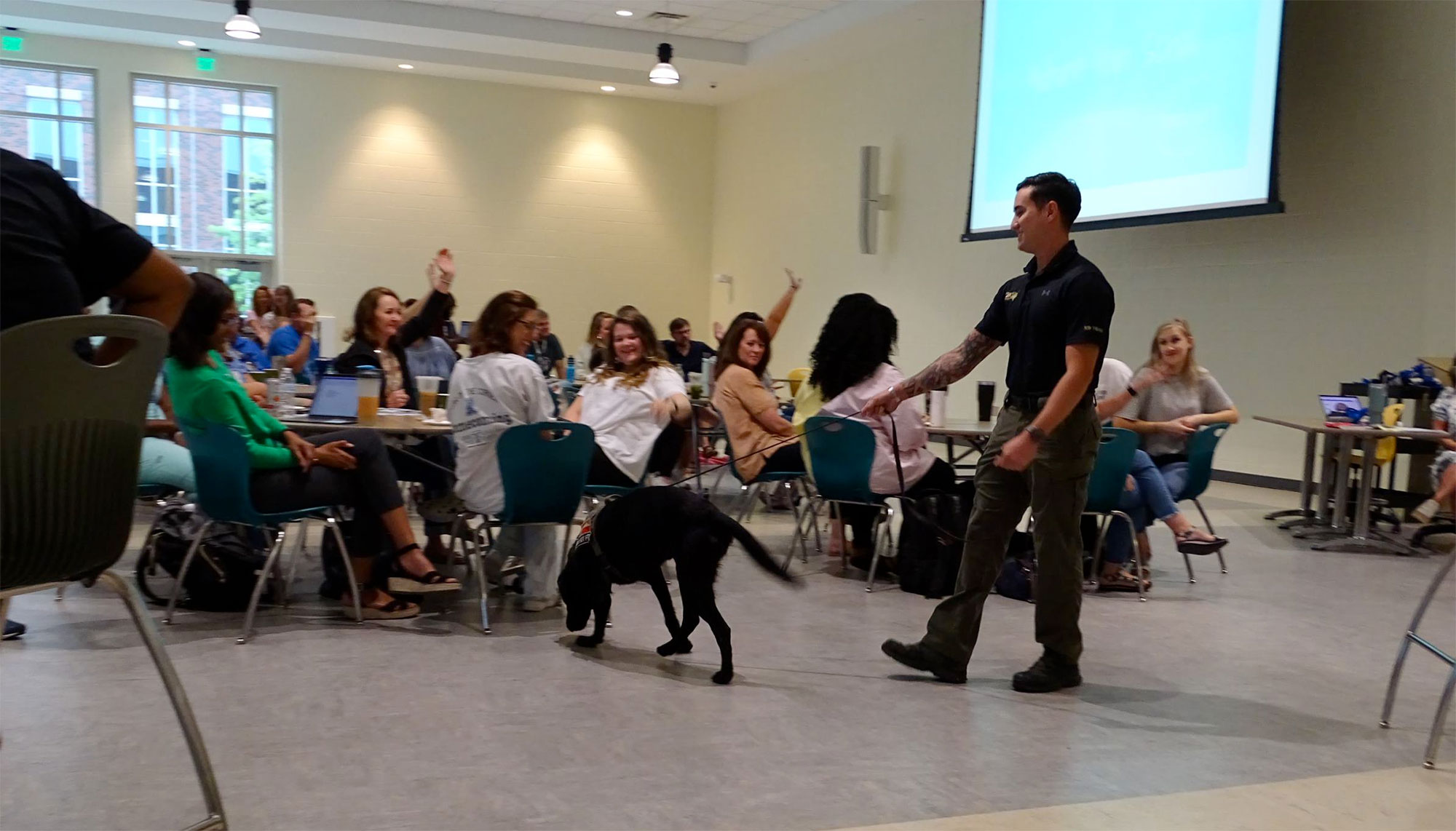 Kinetic Explosives Detection Dogs [KEDD] are the next generation of specialized canines and the first program in the country to be certified by the United Police Work Dog Association. Kinetic Detection is a science-based method for selecting, training, and employing dogs for the identification of body-worn [PBIED] and concealed-carried explosives or firearms. Kinetic dogs constantly sample the air for explosive odor molecules regardless of the delivery system.

Our next generation capable KEDD teams support canine operations in direct contact against body-worn and concealed-carried explosive materials anywhere large crowds of people are gathering. KEDD teams can screen large crowds because we understand a well-trained detection dog can follow odor to its source in a dynamic environment.

KEDD and handler work together in a progressive way – the canines search independently taking the lead out in front of the handler. Our canine professionals understand the importance of positioning the dog to be successful, allows the Kinetic dog to work as an independent mobile detection biotechnology, and allows the dog to follow odor to its source.

Enhanced Firearms Capable [EFC] technology is leading the detection dog industry and our dogs find concealed-carried weapons. Our Kinetic Explosive Detection Dog with EFC technology creates the ultimate mobile detection tool denying access of unauthorized weapons into restricted areas or public spaces. Our EFC dogs can screen large crowds for both explosive materials and firearms.  We understand the threat of firearms is increasing both on the domestic scene and in the international community.

Our dogs are a critical tool all security professionals can deploy in their continuing efforts to keep people safe.

With over 36,000 operational hours in direct support of stopping unauthorized firearms entering our clients’ venues across the US in 2021, we are uniquely qualified to support this type of security solution. Today we are supporting Public Safety Professionals across the country working to mitigate the threat of gun violence with our pioneering method of training dogs to be exceptionally adapted for screening large numbers of people quickly.

Why Paws on Patrol?

The Department of Homeland Security [DHS] on June 7, 2022 under the National Terrorism Advisory System published the latest bulletin which detailed that the United States remains in a heightened threat environment, and several recent attacks have highlighted the complex nature of the threat environment.

“In the coming months, we expect the threat environment to become more dynamic as several high-profile events could be exploited to justify acts of violence against a range of possible targets. These targets could include public gatherings, faith-based institutions, schools, racial and religious minorities, government facilities and personnel, U.S. critical infrastructure, the media, and perceived ideological opponents.”

By definition – a school shooting is an attack at an educational institution, such as a primary school, secondary school, high school, or university involving the use of firearms. In the past ten years there have been a total of 180 school shootings in the U.S. with 365 victims.

Between January 2022 and May 2022 there have been a total of 27 school shootings. Our Paws on Patrol School Safety Program is the first blended public and private sector consortium with the mission of bringing together agencies across the country to leverage best practices and mitigation strategics to have an immediate impact on the dynamic and complex nature of this threat environment detailed in the recent National Terrorism Advisory System Bulletin.

How do Canines Impact Learning?

Canine Awareness Program – parents, teachers, school workers and students will get to know their local canine(s) through interactive workshops

Joint training opportunities prior to the start of the Semester and return of students to in-classroom instruction.

Join our Consortium for all Public Safety, Educators and School Resource Officers